Placental insufficiency (PI) is one of the most common complications of pregnancy, which is a characteristic symptom of growth retardation (ZRP). In 50 - 77% of pregnant women it becomes a major cause of miscarriage [9,11,14].

Currently there is no unified theory to explain the etiology and pathogenesis of PN and ZRP. It is known that the development of pregnancy and fetoplacental complex formation reactions are controlled by the maternal immune system throughout gestation [11,14].

Recently, a number of authors there evidence to suggest that the basis of violations of placental functions of the system when ZRP are changes of immune mechanisms of gestation [1,3,15]. Studies by various authors have shown that the ZRP maternal peripheral blood and decidua of the placenta along with the violation of the ratio of cell populations, changes in the functional activity of phagocytic cells, impaired synthesis and cytokine production [4.12]. Most researchers believe one of the main reasons for the formation of the PN and as a consequence, the development of ZRP are changes in the immune system caused by changes in the functional activity of cytokines [7,8,13].

However, despite intensive study of the pathogenesis of FPN, immune disorders in this disease remain poorly understood. In particular, there is no information about any diagnostically significant immunological markers, which could serve as predictors of FPN [3,5]. Some interest in this aspect of the present study the balance of proinflammatory and anti - inflammatory cytokines.

Cytokines belong to the family of soluble proteins and act as immunological mediators. Subpopulations of cytokines that classically include the T helper 1 (Th1) and T helper 2 (Th2) play a fundamental role depending on the nature of the immunological response. In case of prevalence of Th1 cytokines, the immune system performs a cell-mediated response. Th2 subpopulation induces the production of antibodies against pathogenic microorganisms and thus characterizes the humoral type of response. Recently at least 22 types of interleukin have been identified. Th1 and Th2 subpopulations were first described and thoroughly studied which have opposite forms of action [15]. In humans, the Th1 subpopulation is classically represented by gamma - interferon (IFN-γ) and interleukin 12 (IL-12). Th2 subpopulation is characterized by IL-4, IL-5 and IL-13. The tumor necrosis factor-alpha (TNF-α), interleukins 1-beta (IL-1β) and IL-6 have clear pro-inflammatory effects and are classified in the Th1 - lymphocyte subpopulation [15]. Interleukin 10 (IL-10) is a particular type of cytokine that in humans plays a dual immunological role that is either stimulating, and contraindicative or immunosuppressive. This role excludes it from the Th1 and Th2 classes. However IL-10 was originally described as a Th2 cytokine [2, 15]. TNF-α is important for the cytokine cascade and this is manifested in many diseases [15].

It has been established that during the gestation period the immunological system plays an important role in ensuring the normal development of pregnancy and the occurrence of complications [2, 5, 9]. The success of pregnancy, apparently, is based on the discrete balance between the cytokines T h1 and Th2 which are involved in fetal development [2, 5]. TNF-α is one of the main cytokines in early pregnancy. It participates in the implantation of blastocysts and conversely in the first trimester. It was revealed that as the concentration of pregnancy high TNF-α are associated with the development of pre - eclampsia and progressing diabetes mellitus decreased IL-10 levels and preterm labor [2, 5, 9]. Placental mechanisms also participate in the regulation of the immunological response during pregnancy [9]. Trophoblastic and hofbauerovskie cells in the placenta produce different types of cytokines that are usually autocrine and paracrine functions, but they can cause metabolic changes after the formation of placental fringe, if the fall in maternal circulation [9, 10]. In accordance with literature the placenta may contribute to the induction of maternal immune response reactions and regulatory role it may lead to the development of certain complications such as diabetes and preeclampsia [1, 2, 5].

Previously maternal tolerance to alloantigens was explained by the predominance of Th2-immunity over Th1-immunity which protected the fetus from the maternal "attack". The prevalence of Th1 was observed in the cases of repeated and spontaneous miscarriages and preeclampsia [1, 5, 9]. Nevertheless, the predominance of Th2-immunity has also been reported to occur in the cases of recurrent disorders [9, 10]. In this connection, the Th1 / Th2 paradigm is also insufficient to explain the mechanism that prevents retraction of the fetal allograft. In consideration of this situation some authors began to expand this classic paradigm including answers that are characterized as Th17 and T-regulation (Treg) [9]. Several paradigms were proposed to explain the theory of the immunological system in pregnancy, in particular a model was proposed that explains the modulating balance of pro- and anti - inflammatory cytokines in the development of pregnancy, which directly depends on the immunosuppressive effect of IL-10 [9]. From conception to the end of pregnancy, the interaction between pro- and anti - inflammatory cytokines, of which IL-10 appears to be a key cytokine is fundamental to the promotion of normal pregnancy outcomes. Detailed studies of physiological uncomplicated development of pregnancy show a significant reduction in the number of pro - inflammatory cytokines, such as TNF-α, IL-1β and IL-6 and an increase in anti - inflammatory regulatory cytokines such as IL-10 [9]. In accordance with studies these changes enhance the role of immune modulation in the maintaining and developing a normal pregnancy [1, 9].

In connection with the foregoing the role of IL-10 and TNF-α cytokines during pregnancy appears to be large and of interest for obstetrics but it has not been sufficiently studied.

The purpose of the study - evaluation intracellular production of TNF-α and IL-10 placental decidua macrophages in women with pregnancy complicated and physiological.

Material and methods. Analysis of TNF-α IL-10 was performed in 84 pregnant women who were divided into 2 groups: a core group of 59 women with complications of pregnancy, the control group - 25 women with uncomplicated pregnancies.

Diagnoses placental insufficiency and fetal growth retardation (ZRP) were set on the basis of a comprehensive survey, the criteria were the following indicators: signs of fetal hypoxia (according to CTG), the system of blood flow reduction in the mother - placenta - fetus (according to Doppler), fetal growth retardation (according to ultrasound biometry). Determining the level of TNF-α and IL-10 was performed in 10% homogenate of placenta by enzyme immunoassay (ELISA) using enzyme immunoassay kit «Cytimmune systems» (USA). Placenta were obtained in the timely delivery 38-40 weeks of pregnancy. Tissue homogenate was prepared by the method of D.I. Kuzmenko et al. [2008]. 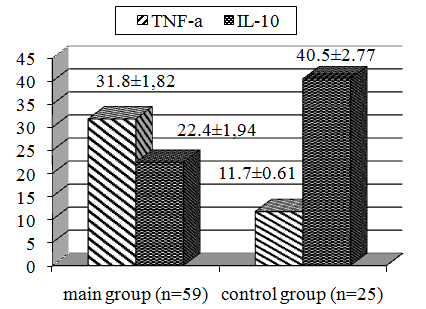 It should be noted that pregnancy complications in 32 patients proceeded against the backdrop of placental insufficiency, and in 27 women were diagnosed with SoG (Table 1).

Table 1. The concentration of TNF-α and IL-10 in the placentas of pregnant women with uncomplicated

Note: * - statistically significant differences between the groups with high - risk pregnancies and control; ** - between groups of placental insufficiency and intrauterine fetus (p<0.05).

Determination of the ratio of the index of the TNF / IL-10 testified to increase it in the placentas of pregnant women with complications of pregnancy (Fig. 2).

Consequently, in pregnant women with complicated pregnancy with an increase of TNF-α, ie, levels of proinflammatory cytokines IL-10, i.e. anti remained reduced, which was assessed as uncompensated type of imbalance cytokines. The maximum increase in TNF and IL - maximal reduction observed at 10 placental insufficiency.

It should be noted that TNF-α is a major mediator of the inflammatory response of the innate immune system, increases vascular permeability, induces the synthesis of chemokines and adhesion molecule expression on the vascular endothelium, inhibit growth trophoblast may lead to placental thrombosis, narrowing of the vessels of the placenta. Causing apoptosis of trophoblast cells, can lead to placental dysfunction, inadequate development of the spiral arteries and uterine vascular insufficiency [10,15]. According to the recent studies, TNF-α has a proinflammatory and procoagulant effects on the endothelium, which leads to disruption of the microcirculation [2, 7, 8]. It is known that TNF has a central place in the cytokine cascade, stimulating the synthesis of many interleukins, therefore, the violation of TNF leads to significant negative consequences in the placenta, in particular, increased secretion of this cytokine can disrupt the processes of implantation and trophoblast invasion [13,15]. The main functions of IL-10 is the formation and activation of the cells with regulatory activity, the suppression of cell cytolytic activity and anti - inflammatory effects [1,2]. Previously conducted studies on the cytokine profile in the decidua of the placenta of women with ZRP [5]. With the advent of the placenta, responsible for the prolongation of pregnancy and intrauterine fetal growth observed modification of cytokines [5]. In the placental cytokine synthesis is diversed. This is dictated by the need to perform diverse functions of the placenta and the software processes of implantation of the ovum and trophoblast invasion [2.5].

Around 90 % of cases the cause of developmental disorders of pregnancy and the formation of the embryo and fetus are epigenetic disorders, including persistent changes in the system of immunoregulation of pregnancy [3,4].

Thus, cytokine status in all cases of complicated pregnancy characterized by increased production of TNF and decreased IL-10. It may be noted that the functioning of the fetoplacental complex and during pregnancy affects the imbalance of cytokines that regulate the development of the placenta. The findings suggest that an important role in the formation of the placenta plays an adequate production of cytokines, and its breach can lead to structural and functional changes. Therefore, the study of the characteristics of different parts of the functional system "mother - placenta - fetus", as well as the search and development of highly efficient prognostic criteria of pregnancy complications is necessary.